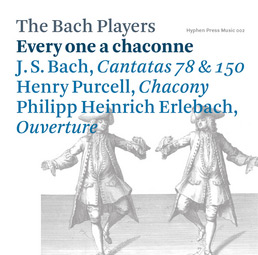 JS Bach: Every One A Chaconne

The Bach Players centre this programme on the chaconne: you will hear how Henry Purcell and J.S. Bach join hands in this much-loved dance form of the 17th and 18th centuries. Of the few works of Philipp Heinrich Erlebach that survive, they perform a suite that concludes with a chaconne. The two Bach cantatas are contrasting: BWV150 is said to be Bach s earliest surviving cantata, BWV78 was composed in Leipzig at the height of his career. There s something about the openness of sound, the sheer quality of music-making and the sense of connection between performers and composers that makes this a very special recording. Its contents explore the world of the Baroque chaconne, a secular dance form that became a staple of music for the concert room and chapel. The challenge of creating a piece above a repeated bass line certainly appealed to Bach, Purcell and the little-known Erlebach, each on inspired, inventive form in the works offered here. The Bach Players, a London-based collective formed in 1996, reach the music s emotional heart with tremendous conviction.